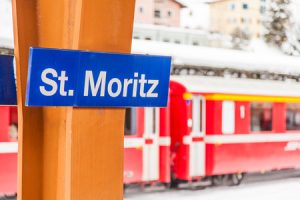 As the first and oldest bobsled track in the world, the St. Moritz-Celerina Olympic Bobrun in St. Moritz, Switzerland holds a special place in the hearts of the sport’s biggest fans. It’s also the only “natural” track to ever host the Olympics; the slopes of St. Mortiz are carved into the ground, rather than built on a raised track. It’s the birthplace of professional bobsled racing, and it remains a formidable track to this day.

That’s why British bobsled brakeman Ian Richardson decided it would, for lack of a better word, be pretty cool to see how a car would perform on a run down the famous St. Moritz track. Initially, he struggled to get the local mayor on board and find a willing driver for the stunt. But by the time Subaru volunteered to take a crack at it in January, he was ready to go.

First, the track had to be widened by a foot-and-a-half to accommodate the width of a Subaru WRX STI. Then, the car’s side mirrors were removed and its street tires were replaced with studded tires for added grip. Once everything was in place, it was all up to Subaru driver Mark Higgins to pull it off

Not surprisingly, the steep banked turns were the trickiest parts of the track to tackle. Take them too fast, and centrifugal force sends the car careening over the side of the track into a nearby snowbank. Go too slow, and the car rolls over on its side, leaving Higgins stranded in the middle of the track.

Things got pretty dicey at times and the car sustained its fair share of bumps and bruises, but Higgins managed to guide the WRX down the track in spectacular, white-knuckle fashion. Check out the video below to see this remarkable bit of driving for yourself!