The monster truck craze is huge. Humongous trucks with imaginative and colorful designs, all seeming to have personalities of their own. They are driven over large mounds of dirt and junk cars, all the while, turning childhood dreams of smashing and crashing, into reality. 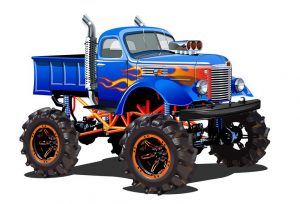 Monster truck fans are unique people who enjoy this testosterone-filled entertainment at indoor and outdoor arenas all over the country. Monster truck entertainment satisfies the craving to see huge trucks race  and demolish smaller vehicles. The action is loud, thrilling, and exhilarating to its fans. One of the major presenters of these live events is Monster Jam, and they put on these Monster truck events all over the United States and Europe as well. These Monster trucks compete in various races, and other timed events; and the exciting demonstrations normally end in what they call, a “freestyle” competition.

For those who have never witnessed one of Monster Jam’s events, it is a complete performance, with half-time entertainment included. Monster truck’s half-time performers, include professional BMX bike racers, and motocross athletes. Half-time can be compared to the X-Games or other extreme sports competitions.

Though the Monster truck events may seem like a childhood fantasy gone wild, it’s also a serious business. There is complex scoring, and a history of each truck is given. If you don’t understand the appeal of these events, it is easy to think that it’s simply a bunch of Southern dudes tearing up trucks, but actually the sport is quickly becoming more diverse. The driver of the popular truck, Hot Tamale, is from Mexico.

One of the other extremely popular Monster trucks is named the Grave Digger. The Grave Digger is from North Carolina, built upon the chassis of a 1952 Ford pickup, equipped with a Chevy engine. It was built in 1981 by Dennis Anderson. Around for over 30 years, the Grave Digger has had several different upgrades and incarnations in its lifetime.

Monster Jam is on tour regularly, and also comes to a town near you, as a part of local carnivals. If you’re a newbie to the sport, it’s a wise thing to bring ear plugs. The noise level at these shows will make a rock concert seem like a day at the library. So if you’re into big trucks, serious drivers, and the enthusiasm of rowdy fans, a Monster truck event is  calling your name.