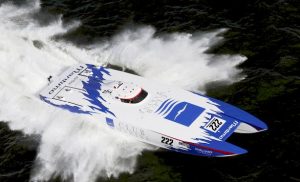 When picking out a marine racing engine, boat owners will need to make one very important decision: Gas or diesel? Both are options when it comes to boats, and there are pros and cons to using both of them. However, there have been differing opinions on which one is better for a marine setting in the past, so you will need to think long and hard about which one you install in your marine racing engine.

At one time, diesel was significantly cheaper than regular gas, which made it an attractive option for boaters. They could pay about a third of the price of gas for diesel and save money. But diesel isn’t as cheap as it used to be when compared to gas, and diesel engines will also typically cost you more money in other areas like maintenance. Diesel parts are more expensive than ones used in gas engines, and the labor involved with them can be more expensive, too.

There was also a time when people believed using diesel in a marine racing engine would help that engine last longer. After all, if diesel is used to power large trucks, generators, and other heavy-duty equipment, then shouldn’t it be used to power boats, too? Nevertheless, the problem is that many boats are only used from time to time, so the diesel can cause corrosion in some marine engines.

That’s not to say that diesel doesn’t have some advantages to it. Diesel engines usually have a much lower fuel consumption than gas engines as well as a greater fuel range. Diesel engines also tend to perform better than their counterparts when they are used on larger boats. They can carry more of a load without putting too much strain on a boat. However, before you make your final decision regarding gas and diesel engines, you should weigh out all factors, including cost, maintenance, performance, and more, and decide which is truly better for you.

Are you having trouble making a decision? SCS Gearbox would be happy to assist you with your marine racing needs. We provide superior components for marine racing and can help you with transmissions, gear changes, engines, and more. Call us at 419-483-7278 today with any questions you might have.