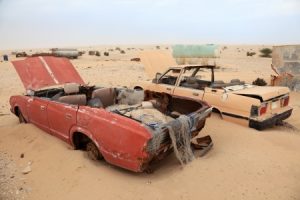 Last year, the highly-anticipated reimagining of George Miller’s classic post-apocalyptic movie series Mad Max hit theaters and blew audiences away with its nonstop onslaught of adrenaline-pumping action. Between its barren wasteland landscapes, crazed villains and a seemingly endless supply of explosions, Mad Max: Fury Road had all the elements it needed to become an instant hit.

Of course, ask any veteran Mad Max fan and they’ll tell you the real stars of these movies are the heavily-modified vehicles that roam the wasteland. These makeshift war machines are loud, brash and beautifully rugged. In Fury Road, George Miller and his team went all out to cobble together some truly fearsome battle wagons from whatever they could find in the nearest scrapyard. Piloted by a gang of vicious wastelanders, these vehicles roar across the desert spitting flames, spreading fear and generally wreaking havoc wherever they go.

Now, the film’s creators have released a veritable treasure trove of raw, CGI-free footage of these automotive monsters in action. Appropriately named Crash and Smash, this video gives us a glimpse into the absolute mayhem that went into shooting some of our favorite car chase scenes in Fury Road. It’s truly remarkable just how much of the action was done with practical effects alone. Even the famous Polecat scene was shot with real humans clinging to poles attached to real moving vehicles. During the final chase scene, the filmmakers managed to capture over 75 of these vehicles roaring across the desert at once.