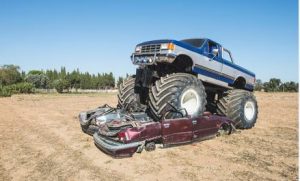 People love to see action. Whether it’s action that takes place on the big screen at a movie theater or action that takes place out on a court or field at a sporting event, people just can’t seem to get enough of the adrenaline that comes along with watching something that is jam-packed with action. It’s one of the many reasons why monster trucks have become so popular over the last half-century.

Monster truck owners and the drivers who get behind the wheels of them have been providing people with as much action as they can handle for years now. It started out with monster trucks driving over scrap cars and turning them into dust. The earliest monster trucks pulverized smaller cars with ease, busting up their windows, their roofs, and their entire bodies. However, as monster trucks have evolved, so have the shows that feature them. Today, monster trucks are faster than ever and drivers are able to manipulate them in ways that people never could have imagined. They can crush cars like they’re nothing, and they can also pull off tricks that are almost too amazing to believe.

Monster trucks are able to pull off the seemingly impossible thanks to all of the various parts that are shoved underneath their attractive outside shell. From roll cages that keep them steady and supercharged engines that give them their power to heavy duty transmissions, torsion bars, and quick change gear boxes, the parts inside of monster trucks are what allows them to maneuver so nimbly as they crush cars and show off their best moves. These parts are the heart and soul of any monster truck, and only the best parts should be used when putting together a monster truck that’s built to last.

Do you love the thrill of crushing cars with your monster truck? Then you should make sure you’re using high quality parts when you’re doing it. SCS Gearbox has all the parts you’ll need to equip your monster truck for the long haul. Call us at 419-483-7278 today to place an order for parts.