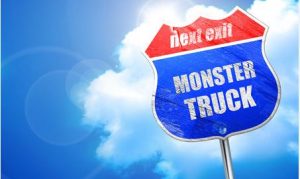 Did you know there’s a new Wonder Woman Monster Jam truck and it’s driven by a 24-year-old who started working on cars at age 13? Yep, Collete Davis is at the helm of this awesome monster truck, competing in Monster Jam in Washington, D.C. and elsewhere.

Like most drivers, Davis has been interested in vehicles with wheels for a long time. As a kid and teenager, she raced go-carts, sports cars, and took part in rallycross races, too. Ever-competitive, Davis decided to play every sport she could, including basketball and competitive cheerleading. While working on cars wasn’t a “sport,” she did discover that you could race cars, and that totally appealed to her.

At only 5-foot-2, Davis is small in comparison to her 12-foot-tall truck. Even though she’s shorter than the tires, she has great command of the truck to make it do great tricks. With Wonder Woman, she’s able to make it do a handstand! Imagine balancing a 10,000 pound truck on its two front wheels– that’s what she manages to get it to do. Now that’s awesome!

When you see Wonder Woman– the truck — flying through the air you should be impressed to know Davis is driving that beast. Another female driver to notice in Monster Jam is Krysten Anderson (for Grave Digger). These ladies are inspiring a generation of young women to consider monster truck racing as a sporty career. It’s no longer just men in monster trucks.

Perhaps you’ve seen Monster Jam, the TV show? Or maybe you’ve gone to their live motorsport event when it has been on tour through your town? Monster Jam’s main attraction are monster trucks showing off in racing and freestyle competitions. At the live events, fans can meet drivers (aka “performers”) during their “Pit Party” and/or autograph sessions. Drivers often autograph memorabilia and related merchandise. Wonder Woman, thanks to the comic and the recent hit movie, is a current “hot property,” with men and women lining up to cheer Davis on as she shows the others who’s boss!

Visit MonsterJam.com to find out if the show is coming to city near you this year.