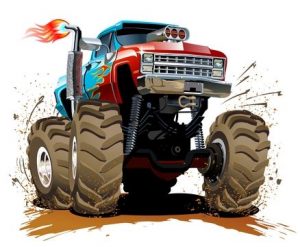 When you think about monster trucks, you probably don’t think about them driving very fast. Most monster trucks weight at least three or four tons, and some of them are even larger than that. So there’s no way that they can actually go all that fast, right?

Wrong. There are some monster trucks out there that aren’t necessarily built for speed. Their owners don’t need them to wow audiences by driving incredibly fast. However, there are also monster trucks that are designed to amaze people by going faster than they would expect. One such monster truck is the Raminator, which set a Guinness world record at the Circuit of Americas in Austin, Texas back in 2014 by going very, very fast during a time trial.

The Raminator, built by brothers Tim and Mark Hall, is 10 feet tall and 12.5 feet wide and weighs more than five tons. It has tires that are more than 60 inches tall, and those tires weigh 900 pounds each. However, it also has a supercharged Hemi engine that was taken out of a funny car that produces 2,000 horsepower. Therefore, the truck can fly. It was clocked going 99.1 mph by Guinness, and it proved that monster trucks can go fast when their owners spend the time modifying them properly.

If you have a monster truck and you want it to go faster than it does right now, SCS Gearbox can help you accomplish your goal. We can provide you with the right parts and the knowledge it takes to build a faster, sleeker monster truck. Raminator showed it can be done, and it’s only going to be a matter of time before some other truck comes along and steals the record from it. Call us at 419-483-7278 today to learn more about how we can help you improve your monster truck.