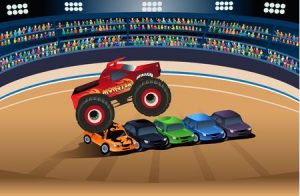 Most monster truck shows only last for a couple hours. Nevertheless, in the days leading up to a show, workers often spend countless hours preparing a stadium for the monster trucks. In some cases, it can take up to 650 hours to get a stadium like Gillette Stadium in Massachusetts ready for a monster truck show. Here are some of the steps that need to be taken.

Laying down a foundation to protect the ground

Monster trucks are huge, and they can do a lot of damage to the ground if it isn’t protected. So before monster trucks start tearing up a football field or whatever other kind of field is located inside of a stadium, a foundation is placed over it. This foundation is usually made up of large pieces of plywood and a plastic liner that is designed to protect the ground underneath of it.

Bringing in the dirt

After a foundation has been laid down to keep the ground safe, it’s time for workers to haul in dirt for the monster trucks to drive over. It usually takes more than a dozen dump trucks to do it, and while the exact amount of dirt depends on the size of the stadium, there is often upwards of 10,000 tons of dirt brought into a stadium for a monster truck show.

Building ramps and other obstacles

After all of the dirt has been hauled in, workers are then asked to take it and use it to build ramps and other obstacles for the monster trucks. In order to do this, the dirt can’t just be any ordinary dirt. It has to contain a mixture of clay and sand so that it can be molded easily. After a show is over, it’s not uncommon for the organizers of a monster truck show to store the dirt somewhere nearby so that they can use it again in the future.