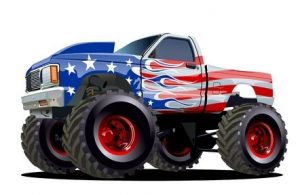 Monster Jam has evolved very quickly in the U.S. over the course of the last 50 years, and it’s starting to evolve in other places like China, Argentina, and even Saudi Arabia as well. Monster Jam is proving that there’s a rabid fan base for monster truck driving and showing just how big the motorsport could become before it’s all said and done.

The Start of Monster Trucks

Back in the 1970s and 1980s, monster trucks took the world by storm. Before long, there were monster truck events taking place all over the country with legendary monster trucks like Bigfoot leading the way. But it wasn’t until 1995 when the United State Hot Rod Association created Monster Jam that monster trucks really took center stage and started to captivate millions of people.

The Growth of Monster Jam

Since then, Monster Jam—with help from Feld Entertainment, the company that operates Monster Jam—has expanded and held shows all over the country and world. The monster trucks that take part in Monster Jam shows have evolved along with the organization and have become technologically-advanced pieces of equipment that are capable of doing things that would have seemed impossible just a decade or two ago. Additionally, Monster Jam has made it a point to give its fans access to its drivers at all its shows, which has helped the company grow by leaps and bounds every year.

Today, Monster Jam holds about 350 events every year, and they have a presence in more than two dozen different countries. There are a whole host of Monster Jam tours taking place at any one time, and it all culminates in the Monster Jam World Finals in Las Vegas every March. Even that will be evolving and expanding in the near future, with Monster Jam planning to hold the World Finals in a new location every year starting in 2019. But no matter where Monster Jam goes, it seems people just can’t get enough of the monster trucks they bring along with them.

SCS Gearbox provides a lot of the parts that help push the monster truck world forward. We sell quick change drop boxes, torsion bars, jack shafts, and so much more. Call us at 419-483-7278 today to order parts for your monster truck.