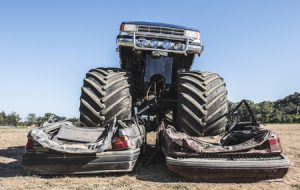 Tired of being cooped up inside this winter? This weekend, you can get out and warm up around the roaring engines of some of the world’s most famous monster trucks at the Quicken Loans Arena in Cleveland. That’s right—the Monster Jam Triple Threat Series is coming to Ohio. The event will feature four performances from 1 to 7 p.m. on Saturday, and then again from 1 to 6 p.m. on Sunday.

If you’ve never had a chance to take the kids to a live monster truck show, this is a great opportunity. You can even get $15 coupons for kids’ tickets at any local Metro PCS location. The Triple Threat Series only comes to a select few cities every year, and it features some of the biggest monster truck stars in the world.

This will be an especially exciting event for those of us in Ohio because a Cleveland native will be in the driver’s seat of the iconic Zombie. Bari Musawwir is a graduate of Cleveland Heights High School who dreamed of becoming a monster truck driver from the time he was a young child. Now, he’s able to live out that dream and share his passion with the citizens of his hometown.

“It’s so gratifying to live out a childhood dream as my career in hopes that I might inspire the Monster Jam fans that I meet along the way,” said Musawwir in a recent interview.

Other popular contenders in this year’s Triple Threat include Grave Digger, Scooby-Doo and El Toro Loco. Tickets are still available! If you’re looking for something to do this weekend, the Monster Jam Triple Threat is not to be missed.