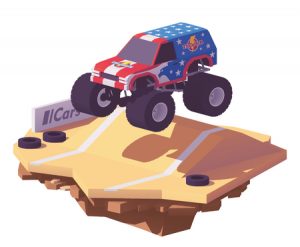 When you sit down at a Monster Jam show in 2019, it won’t take you long to realize that today’s monster trucks are capable of doing more than crushing cars and making a lot of noise. They’re also designed to drive fast, and many of them are even able to soar high in the sky thanks to their surprising jumping abilities. They’re able to jump high by relying on new forms of technology that have made it possible. Here is how technology is taking monster trucks to new heights.

The tires found on monster trucks are massive. They’re 66 inches tall with 43-inch-wide treads on them. They weigh approximately 650 pounds each and are inflated to just over 20 psi. Having tires this big allows monster trucks to take off and land. It’s also worth noting that monster truck tires don’t have brakes on them in most cases, as braking is done on a truck’s driveshaft.

While the tires on a monster truck play an important role when it comes to jumping up to 40 feet off the ground, it’s the shocks on it that allow it to land safely. Monster trucks have two bypass shocks on them containing highly pressurized nitrogen. Monster truck drivers are able to adjust their shocks while they’re driving depending on whether they’re racing or preparing to take a jump.

Jumping in a monster truck obviously wouldn’t be possible without a powerful engine, and that’s exactly what you’ll find in every monster truck that’s used today. Most monster trucks have big-block engines that can produce up to 1,500 horsepower and more than 1,300 pound-feet of torque. This is more than enough power to give monster trucks the short little bursts of power they need to pull off truly breathtaking jumps without a problem.