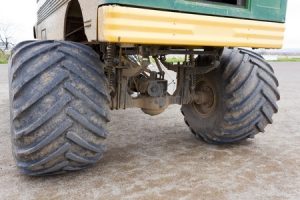 In order to be considered a monster truck, a monster truck needs to weigh at least 9,000 pounds. Nonetheless, there are some that can weigh as much as 12,000 pounds or more in some cases. With that in mind, you might be surprised to see how fast some monster trucks can move. Guinness World Records once clocked a monster truck going more than 99 miles per hours. So how are they able to go so fast despite being so robust?

When blowers force air and fuel to move through an engine quickly, they increase a monster truck’s horsepower. It’s not uncommon for horsepower to hit the 1,500 HP mark in the middle of a monster truck show. There are even some instances in which horsepower can get all the way up to 2,500 HP in short bursts. This allows a truck to move fast for a short period of time.

One of the things you’ll notice at a monster truck show is that it’ll be very noisy. This is due in large part to the sudden increases in horsepower that allow a truck to drive fast. When a truck is reaching 1,500 to 2,500 HP, it’ll create a lot of noise. This is a necessary side effect of driving fast for monster truck drivers.

Do you want to make your monster truck drive faster than it does now? SCS Gearbox has the parts you’ll need to work on your monster truck and pack more power into it. Call us at 419-483-7278 today to order the right parts for it.