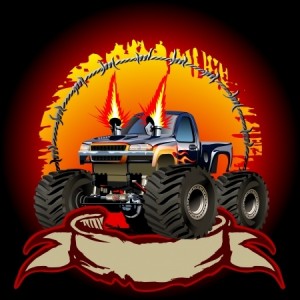 The history of monster trucks is as storied as that of the country it was founded in, America. Monster trucks are as American as apple pie and baseball, and demonstrate the indomitable daredevil spirit that this country is known for. It’s almost as if monster trucks were on the Oregon Trail. Boy, is that quite the image. Really changes the perception of that trip, you know the one that was ingrained in our heads as children.

Sometimes we wonder at SCS Gearbox why there isn’t a monster truck on the American flag; it’s the thing that best symbolizes this country’s tough as nails spirit. Do you know the history of the monster truck? It reads like something out of a children’s book. It all starts with someone named Bob Chandler, a modern day folk hero along the lines of Paul Bunyan or Johnny Appleseed.

He created a monster named Bigfoot, the first ever monster truck. This was back in the mid ‘70s when men had the patience and fortitude to do great things, such as transforming a Ford F-250 into something that would change the landscape of auto entertainment. But it wasn’t an easy climb to the arena top; the first Bigfoot broke down constantly and this continued for years. Eventually Bob revamped Bigfoot until the tires were 66 inches tall. It was then that Bob realized he had created something truly monstrous.