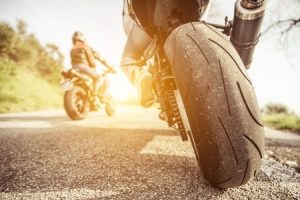 In addition to making sporty luxury vehicles that consume oil like Guy Fieri in a cheesecake eating contest, BMW is also known for making some pretty good-looking motorcycles. In fact, after being barred from making warplane engines in the wake of World War 1, BMW began manufacturing motorcycles before it started making cars. The German automaker has had roughly a century to experiment and refine its motorcycle designs, and now they’re offering us a glimpse of what the next century’s motorcycles might look like.

It’s called the Vision Motorrad Next 100, and it looks like it came straight out of the Batcave.

With long, uninterrupted curves and a matte black carbon fiber body, the bike really does look like something the hero of an action flick might ride. Aside from its striking body design, the Vision Motorrad also features a number of driver-assist technologies such as a self-balancing system and camera-based sensors that automatically avoid collisions. It also features a pair of smart glasses called the Visor which provides the rider with a heads-up display and allows them to control the bike’s functions with eye movements.

Thus far, BMW has released very little information about the Vision Motorrad’s drivetrain, aside from the fact that it is a zero-emission design.

This leaves us wondering – Is the Vision Motorrad all about, well, the vision? Has BMW paid any attention to the experience of what it would be like to actually ride the bike, or is it all about aesthetics? The bike certainly looks cool, but motorcycle enthusiasts want more than good looks. They want something with some guts that can accelerate like crazy and navigate winding roads without breaking a sweat. Sure, the self-balancing system would no doubt make this a pretty nimble ride, but is there really a human at the helm, or just a computer? At their heart, motorcycles have always been about the riding experience, and the designers behind the Vision Motorrad Next 100 seem to have forgotten that.