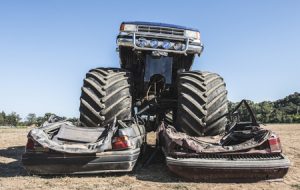 Monster trucks really haven’t been around for that long. They first started to pop up on the scene back in the 1970s when people began modifying their pickup trucks to make them bigger and badder. After awhile, it was clear that monster trucks were here to stay.

You really can’t have a conversation about monster trucks without talking about Bigfoot. It first appeared back in 1981 when Bob Chandler used it to crush a bunch of cars to promote his business. But it wasn’t long before he realized that he should use the truck as more than just a marketing tool. He started outfitting Bigfoot with 66-inch tires so that he could amaze audiences by obliterating cars with it.

King Kong showed up at right around the same time Bigfoot did, and it had just as big of an impact on those who fell in love with monster trucks at the beginning. Like Bigfoot, King Kong was capable of crushing other cars and quickly became one of the most well-known monster trucks. The monster truck was driven by Jeff Dane, who also transformed into one of the first celebrities in the monster truck industry.

Most people recognize that monster trucks are powerful machines that can crush anything in their path. But what they don’t always realize is that monster trucks are also surprisingly fast. Back in 2012, Aaron’s All-American Dream Machine shattered a world speed record by going almost 97 miles per hour. It’s one of the more recent monster truck institutions to make a mark on the industry.